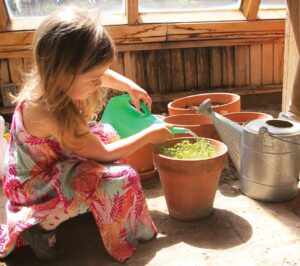 Gardening up here at altitude is a labor of love. (Much like parenting.) Determined gardeners contend with blink-of-an-eye growing windows, hurricane-force winds, out-of-season frosts, and ravenous wildlife. And they don’t call it the Rocky Mountains for nothin’. Digging a hole often requires the industrious use of a pickaxe.

So with all that frustration seeing from the soil, getting kids out in the garden may sound like a chore. But Nederland residents Christel Markevich and her son Anyll, 18, say that with the right approach, getting your hands dirty can be incredibly “grounding and healing, especially for children.”

Christel’s introduction to becoming a green thumb came from her grandmother, who gave her a small plot of land and child-sized tools to grow her own garden. From then on, she’s had an obsession to “gather.” When Anyll was old enough to join her in her garden, she’d place him on her lap as she soaked her shoots and seedlings with water.

But she cautions that “To take a young child into the garden is perhaps not the most difficult thing. The most difficult is to keep the child in the garden.” To do that, Christel looked for ways she could pair gardening with Anyll’s natural interests. Like many young children, it started with taste buds. Anyll loved snow peas, so Christel planted rows of them and created what she calls a “down to earth” story to help Anyll understand the germination and growth cycle. The story was from the seed’s perspective, being pulled toward the light and woken up by the sun’s energy. “It was magical for him,” and most importantly, “we were also spending this time together.”

As Anyll became more ambulatory, their plot became a place to make mountains and rivers with his toy truck. Crystal recalls, “It was the garden, but it was all the play around it.” And as her son got older, the garden was a place “to meet Anyll where he was at, and what he had to share.”

The two have been growing edibles together for nearly two decades, and Anyll says the impact isn’t just a memory but more a quality of his existence. “I felt this from my childhood—the small things that build up values ​​and interests that then become much bigger things later on. I feel like gardening overall is one of those things. It’s a great way to plant seeds,” he says, laughing.

It wasn’t always lustrous pea shoots and towering kale for the Markevichs. A first attempt at high altitude gardening yielded a decent crop the first year, but the second year, word had gotten out in the forest, and the local critters made a buffet out of their garden. Ned Victory Gardens, on its website, warns mountain gardeners that any number of pests can easily and quickly destroy a garden, including, but not limited to: dogs, voles, aphids, birds, moose, and deer.

The Markevichs knew this all too well. So when they moved into their home on Magnolia, they were careful to research and design a garden that would safely keep critters from eating their bounty and minimize their footprint and impact on the land. They landed on a keyhole design that originated in Africa. Yet again, this process plugged into Anyll’s inherent interest in solution-based research. He commends his mother for always giving him the space to explore and experiment, even if that meant he was occasionally growing more weeds than vegetables. Eventually, he says work in the garden became “a shared, creative project we were participating in together.”

Community—within the same family, between neighbors, or among an entire town—is a resonant theme in growing food. The Nederland Food Pantry and Community Garden and the Ned Victory Garden welcome new and seasoned gardeners to help with planting, weeding, and harvesting. For parents uneasy about breaking ground on their own, these organizations provide hands-on experience for the whole family.

Anyll says in all his years of gardening, the ecological connection stuck with him. He remembers seeing a chewed-up earthworm and committing to making the garden a sanctuary so that “all the creatures that called the garden home could just live their lives there.”

He’ll soon attend Prescott College in Arizona, where he will study to become a wildlife biologist.

Peak Parenting is a new column covering everything local parents are talking about. Ideas? Email us at [email protected]