If winning a Grad Slam is already reaching the heights of the tennis world, doing it at 19 is out of the ordinary. It had been a long time, since 1990, that no one had reached that age, not even Nadalwho went publicly to his feet 30 seconds after the victory. Carlos Alcaraz achieved it without suffering, in the easiest match of last week and he is a man of records. He will lead the ATP rankings from Monday, becoming the youngest in history. However, reaching the top at such a young age comes with high risk, high expectations, possible future frustration, or deification too soon. We spoke to psychologists Teresa Terol and Luis Miguel Real so they can explain the advice we can give our children if they succeed earlier than expected and how to keep their feet on the ground.

A life of success or frustration?

Making history is everyone’s dream. May you be remembered when you are no longer for an achievement in your life, leave something for posterity, have it all, touch the sky. This success is usually achieved over years and is linked to professional milestones that cannot be achieved until you have a certain status.. However, what happened to Alcaraz is totally different. He’s only 19 and people are already talking about him as the best in the world.

“Sure, the first thing you need to do with this title is enjoy itbut this has a danger, this is what usually happens to actors, singers or sportsmen who succeed very young and is that they end up idealizing this period for the rest of their lives, so much so that, once this happens, they fall into depressive processes“, explains Réal. 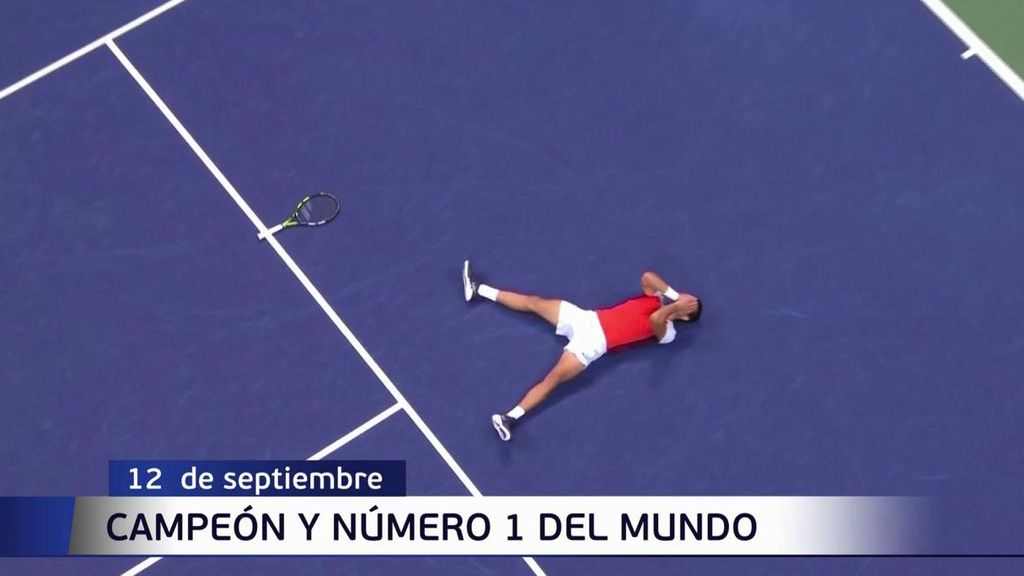 Carlos Alcaraz: the number one tennis player at 19, wins the US Open

Moreover, by not having a fully formed and developed personality, there is a risk that he will not know how to value what he has achieved and what it means in his life. “It is obvious that Carlos Alcaraz has spent years training and working in tennis to get where he is, but having done it at such a young age may cause us to not develop any kind of frustration tolerancebecause, in part, he didn’t fall several times before reaching the top,” adds Teresa Terol.

The risk of comparisons

Therefore, one of the main functions of their parents and coaches is make him understand that he cannot always be the best and that success does not only depend on himself, but also on his environment. Carlos Alcaraz has a lot of pressure on him, at least he is bound to be like Nadal, he has a record in front of him and that’s why his career is going to be meteoric.

“The role of the parents is to ensure that he does not have tantrums or deep disappointments when he does not win.explain to him that he won’t always do it, no matter how hard he tries, because in sports you depend on external factors and not everything is under your control. It is very important that you internalize that not winning absolutely every game does not make you worse. and it does not disappoint anyone with that,” says Real.

Therefore, the function of the parents, in this case, would be twofold. On the one hand, help you come down to earthhow Nadal’s uncle did with his nephew, and, on the other hand, help you deal with potential frustrations that appear along the way. We also cannot miss another of the most important roles they will have throughout Carlos Alcaraz’s career: encourage you to focus on other aspects of your life. “It will be very important that they help him see that in life he has to do more things. Elite sports often require so much training that they end up taking us to extremes and that the desire to be on top can end up losing us and that the opportunity cost is very high“, points out the psychologist.

Failing to become divine will be one of the challenges the youngster will face both on and off the slopes. and it is that a good education in values ​​will be crucial for the development of his career from this moment on. It is precisely the Stoic philosophy that speaks of to success and failure, these two imposters, must be treated with the same indifference and that if we keep our feet on the ground no one will have to bring us back to earth, since overconfidence is a weakness and a burdenconcludes Terol.

We use cookies on our website to give you the most relevant experience by remembering your preferences and repeat visits. By clicking “Accept All”, you consent to the use of ALL the cookies. However, you may visit "Cookie Settings" to provide a controlled consent.
Cookie SettingsAccept All
Manage consent

This website uses cookies to improve your experience while you navigate through the website. Out of these, the cookies that are categorized as necessary are stored on your browser as they are essential for the working of basic functionalities of the website. We also use third-party cookies that help us analyze and understand how you use this website. These cookies will be stored in your browser only with your consent. You also have the option to opt-out of these cookies. But opting out of some of these cookies may affect your browsing experience.
Necessary Always Enabled
Necessary cookies are absolutely essential for the website to function properly. These cookies ensure basic functionalities and security features of the website, anonymously.
Functional
Functional cookies help to perform certain functionalities like sharing the content of the website on social media platforms, collect feedbacks, and other third-party features.
Performance
Performance cookies are used to understand and analyze the key performance indexes of the website which helps in delivering a better user experience for the visitors.
Analytics
Analytical cookies are used to understand how visitors interact with the website. These cookies help provide information on metrics the number of visitors, bounce rate, traffic source, etc.
Advertisement
Advertisement cookies are used to provide visitors with relevant ads and marketing campaigns. These cookies track visitors across websites and collect information to provide customized ads.
Others
Other uncategorized cookies are those that are being analyzed and have not been classified into a category as yet.
SAVE & ACCEPT